Rebecca Ekmark began her martial arts training in Thunder Bay Ontario, learning Tae Kwon Do. She reached the rank of 2nd gup before her family moved once again - one more move of 16 before settling in northern Minnesota, hopefully for good.

Northern Minnesota didn't have a Tae Kwon Do studio at the time that was close enough, so through research on-line, she discovered Range Martial Arts. The Tang Soo Do practiced there had many similarities to its sister martial art, Tae Kwon Do, so she jumped in and became a dedicated student, working her way up the ranks.

In March 2011 Rebecca reached the rank of cho dan.

When black belt is attained in the WTSDA, learning doesn't end. A whole world of new opportunities opens up - new goals and responsibilities. We move forward with an internal drive that tells us to keep striving, keep bettering oneself, and then take every chance to share the knowledge learned with students that join us at Range Martial Arts. When Rebecca attained her instructor's certification, she was honored to help her fellow instructors in that task.

Rebecca has also been practicing Ki Gong since 2010 at Range Martial Arts and is a level 4 Ki Gong instructor.

Rebecca has lived in the US as far north as Alaska, west as Oregon, as well as Colorado and, of course, Minnesota. She has also lived in Labrador, Ontario, and BC Canada, and in Botswana. When she is not at the dojang she can occasionally be found on her farm, busy with her husband of nearly three decades, and their two daughters, both cho dan bos in Tang Soo Do. When not teaching or farming, she volunteers for the Evergreen Fire Department as a first responder. 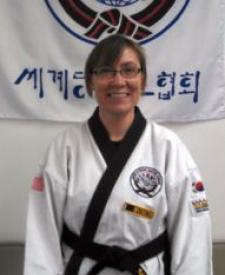