Mrs. Wickstrom began martial arts in August of 1992 at 38 years old for health reasons. Her cholesterol was elevated and her doctor told her to get some exercise and to eat healthier. Eating healthier was not as difficult as finding an exercise she could continue to practice at home-you need the right music and you need the teacher counting out the beats for aerobics classes. Walking alone these days is not very relaxing. She saw the Range Martial Arts sign and pointed it out to her husband. He suggested she call and ask some questions. That was all she needed. She signed up at that same evening's advanced/adult class.

Mr. Steve Yukich was the instructor then and he was the only black belt in the school. He was the owner and the instructor at Range Martial Arts. As Mrs. Wickstrom moved through the ranks, she began teaching the beginners. Being an adult at a green belt level, she became responsible for summer morning classes. The school was able to keep many of the students they usually lost over the summer. She would record what she accomplished with each student in the morning classes so that Mr. Yukich could review with her during the advanced/adult classes in the evening.

In October of 1996 Mrs. Wickstrom successfully tested for her cho dan bo rank. This began a long road to black belt. She helped train a 16-year-old boy, Bryan, to his black belt. She and he took a mock dan test together, but it was determined that she was not quite ready to test yet. Mr. Yukich's wife became ill and he needed to depend on her to teach more and more classes as the years passed. Mr. Yukich retired and moved to Texas for his wife's health in June of 2003. She was inducted into the WTSDA Hall of Fame as Instructor of the Year in 2018 at the World Championship.

That 16-year-old black belt was Mr. Bryan Fagerstrom and June 1, 2003 he took over the school. Mrs. Wickstrom successfully completed her black belt test in September 2003 and has become a certified instructor with the WTSDA. In October of 2008 she tested and passed her second degree black belt exam and passed her third degree test successfully in April of 2013.

Mrs. Wickstrom is a part of the black belt team that conducts self defense clinics across northeastern Minnesota. The groups range from as few as six to as many as 175. The groups have ranged from the Girls Scouts of America to the Red Hat Society, religious groups to professional groups, high school English classes, and a group called Kids Plus.

Mrs. Wickstrom now works part time as a substitute teacher in the high school. She has been married to her husband, a retired auto mechanic, for over 40 years and she loves a good mystery.

She also practices and teaches Ki Gong, a gentle Korean exercise program that improves ones body, mind, and spirit. She holds a Level VI certification in the World Ki Gong. 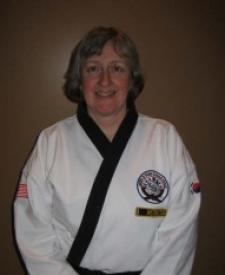