Mr. Tindal started training at Range Martial Arts in 2013. He was the first student accepted in to the Haidong Gumdo program under Master Koivisto that had no previous martial arts experience. His immediate passion for Haidong Gumdo along with his drive, discipline and consistent practice helped him achieve ranks quickly.

Mr. Tindal was born in Hibbing MN and has lived most of his life in northern Minnesota's Iron Range. He has two children, one of which also has trained at Range Martial Arts in the Tang Soo Do and Haidong Gumdo programs. Jody was a local dermal artist for fifteen years and a lamp worker for ten years before he started working with adults with mental and physical disabilities in June 2013 as a program instructor. Mr. Tindal holds current cpr and first aid certifications, and completed the Hibbing Chamber of Commerce leadership program in 2014 where he and his team was awarded with the Presentation of the Year award.

In his free time Mr. Tindal can be found fishing, blacksmithing or training with fellow students. 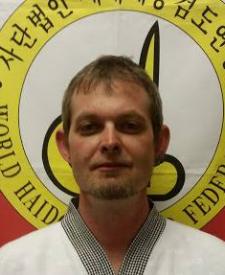