I began my study of Tang Soo Do when I was fifteen, under the instruction of Master Robert Willis in Duluth Minnesota. I continued through high school, and then during college in California I would come home to train in the summers and when I was home on Christmas Break under Mr. Bob Carlson and Chris James. After graduation I came home to Duluth and continued my training, earning my First Degree Black Belt in 1998 with the support of my husband Carl. The test was held at Circle Pines Karate Institute and I was honored to meet and test in front of Grand Master Jae C. Shin.

While living in Hibbing, I was able to do some training with Mr. Yukich in Chisholm, but decided to move back to Duluth where I began my public school teaching career teaching Choir in Duluth Public Schools while Carl was in Graduate School at the University of Minnesota-Duluth. I had to take a break from training as my Mother's 11-year battle with breast cancer intensified, with her passing in the Spring of 2001. I continued to teach Choir, but was laid off in the Spring of 2003. We were fortunate that Carl was on leave from his teaching position in Hibbing, so we moved back and started our family. I was working on my Masters Degree in Music Education through UMD, and was able to stay home with our son Matthew. One day I saw Mr. Yukich at Super One Foods in Hibbing and apologized for not having been able to train more consistently. He just said: "You have nothing to apologize for. You're doing the most important job of being a parent. Come back when you can." I was so relieved and encouraged to hear him say that. I knew I would come back, I just wasn't sure how that would happen.

In the Summer of 2016 our son took a Tae Kwon Do class at Hibbing Community College's College for kids, and was excited to continue training. I said, "If we're doing this, I know exactly where we're going." I called Mrs. Ramona Wickstrom the next day, and Matthew, our daughter Ginny and I started training. My husband Carl joined a month later. With the support of Mrs. Wickstrom, Mr. Sean Argir, Mr. Scot Bennett and Mr. Justin Koivisto, I earned my second degree Black Belt in October of 2017 while I was completing a Masters Degree in Spanish for the Professions through Mankato State University, teaching Music at Hibbing Community College, and Choir at Hibbing High School. Master Maddox and Mr. Koivisto (and of course my husband) helped get me through the last push to the finish.

We are currently training at Range Martial Arts East under Mr. Koivisto. It has been a wonderful experience to return to training with my family, and see how Tang Soo Do is helping us all to grow as martial artists. I am very thankful to have all the training opportunites that RMA East provides, and hope to take advantage of them as long as I can. 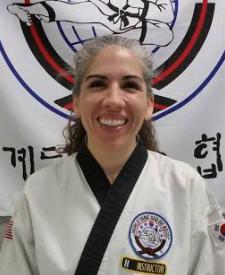