My journey into martial arts started when I was about 15 years old. My parents signed me up to take classes at Range Martial Arts in Chisholm, Minnesota under the instruction of Mr. Steve Yukich in 1993. I had advanced to the rank of 8th gup during my training there. My parents gave me a choice to play hockey or continue with martial arts. I chose to play hockey. Now that I am older and continuing with my Tang Soo Do training, I regret not choosing to stay in martial arts when I had the opportunity. Even though I was there for only a short time, the seven tenets and the five codes of Tang Soo Do had given me a path to follow - one that would help me become the person I am today.

I am now a certified instructor in the World Tang Soo Do Association as of January 8, 2016. One of my goals as an instructor is to instill the same kind of confidence in all my students that my instructors instill in me. 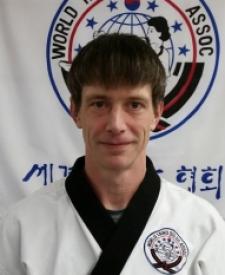